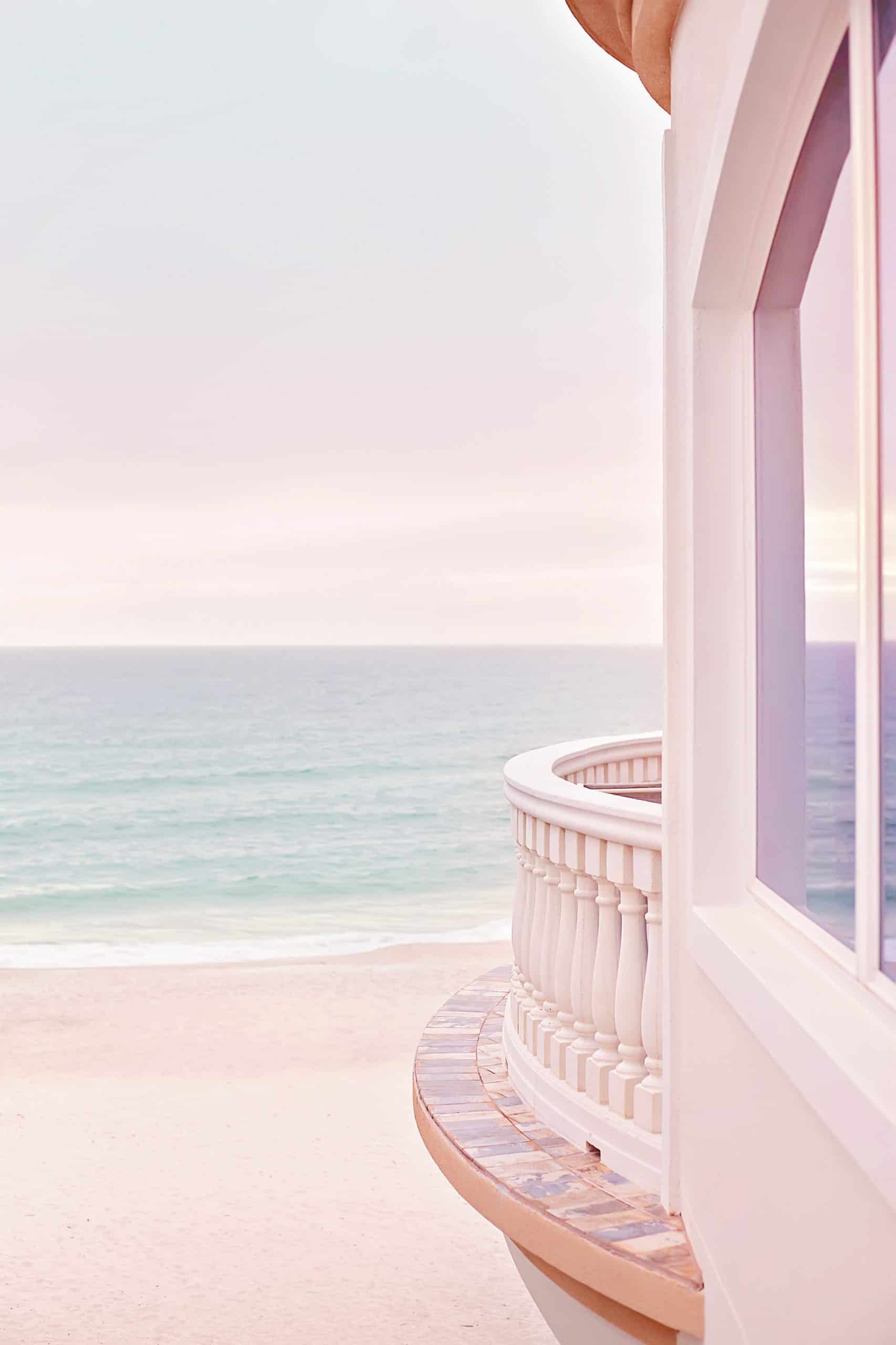 This post may contain affiliate links, which means I'll receive a commission if you purchase through my link at no extra cost to you. Please read the full disclosure here.
Jump to Recipe - Print Recipe

Why are these stuffing balls the best ever? Because they’re crispy, tender, and buttery with flavorful herbs sure to complement any holiday dish you serve.

This post is all about how to make the Best Stuffing Balls Ever!

Instead of making grandma’s old-fashioned stuffing recipe this holiday season, level up your cooking by serving these flavorful and buttery stuffing balls. They’re the perfect side to any holiday meal. They’re moist and tender on the inside and a bit crispy on the outside.

If you’ve never been a fan of plopping a pile of mushy stuffing onto your Thanksgiving plate, then this recipe is also for you. While I’m sure grandma’s mush is very delicious, you won’t want to go back to how you ate stuffing as a kid once you taste these balls.

BTW, this recipe wasn’t meant to throw shade on grandma or Stove Top’s stuffing kit, but times change, and so do traditions. While I don’t know where stuffing balls originated, I know that the cornbread used in this recipe is a southern tradition.

Whether you’ve grown up referring to it as stuffing or dressing, get ready to experience this popular holiday dish in a brand new way. Oh, and did I mention these balls are just as easy to make as buying a Pepperidge Farm or Stove Top box? Because they are, except all of the ingredients are FRESH!

Many of us have memories of Thanksgiving and Christmas when thinking about making stuffing (or dressing). Traditionally, it’s stuffed inside the bird (a turkey). However, you can enjoy these tender and crispy balls alongside almost any meal well after the holiday season.

Since they don’t have any meat added, you could say they’re vegetarian stuffing balls, but the recipe does call for some chicken broth. Use vegetarian broth as a substitute if you’d like.

Stuffing Ball Holiday Tip: If you’re making these as a side for Thanksgiving, I always double the batch and then freeze the second batch of balls for Christmas. I use a vacuum sealer and this protects the balls from freezer burn. If you don’t own one, place them in an airtight container. Wrap plastic around the container and then foil for extra protection.

Step 2: Take 1/2 of the loaf of sourdough sliced bread and cut off the crusts. Next, lay the slices on a baking sheet and set them on the rack in the middle of the oven. Bake at 225 degrees F until the bread is crispy and dry for about an hour and a half. Check the slices approximately every 30 minutes, turning them over.

Step 4: Chop one stalk of celery and one small yellow onion.

Step 6: Add 1/2 cup of butter (one stick) to a medium skillet and sauté the chopped celery and onions until they are tender, approximately 7 minutes.

Step 7: Add celery and onion mixture to the cornbread and sourdough bread cubes in a bowl, along with seasonings and eggs. Start by adding 1.5 cups of chicken broth to the mixture. If the stuffing is still dry, add another 1/2 to 1 cup of broth until the filling is moist and forms a ball. Mix ingredients well.

Step 8: Form the mixture into balls. Use about 1/2 cup of mixture for each ball. The recipe yields 15-18 stuffing balls. Arrange the balls in a greased baking dish and cover them with foil to keep them moist.

Step 10: Remove the foil cover and bake them 15 minutes longer or until brown.

Can I Make Stuffing Balls The Day Before?

How Do I Keep My Stuffing Balls From Falling Apart?

First off, DO NOT stuff your turkey with stuffing, and then try to make the stuffing balls. You risk dry stuffing balls, which will fall apart. When you add any liquid to bread, like egg and chicken broth, the bread instantly acts as a sponge, and it becomes effortless to form the dressing balls without them falling apart.

But Why Do They Keep Falling Apart?

Stuffing should stick together regardless if you’re making balls or not. If your stuffing is falling apart, that simply means the liquid to bread ratio is incorrect. First, follow and measure all ingredients exactly as the recipe mentions. If the mixture is still too dry add more broth as advised in the recipe.

Can You Freeze Stuffing Balls?

Yes! If you know you’re not going to be serving these balls within four days of making them, you can freeze them in an airtight container. Wrap the container in plastic wrap and lastly in foil for extra protection against freezer burn.

The best way to protect your food from freezer burn is to use a vacuum sealer. I have used one of these several times over the years for storing food in the freezer and they work great.

While this stuffing ball recipe is delicious, there’s NO RULE that states you can’t add variety. This recipe is primarily vegetarian, but if you like sausage meat or turkey in your stuffing balls, do it!

Get creative as you’d like here. Some even prefer spinach and cranberries, while others prefer a stuffing ball with gravy.

A nutritional benefit from making these stuffing balls is that you can exercise (no pun intended) portion control. One-half cup of stuffing is generally the amount used to create a ball, compared to plopping a big pile of stuffing onto your plate and not knowing the exact amount.

As far as the actual ingredients go, I cannot say there is a ton of nutrition in the stuffing. It’s mostly bread, seasonings, and a lot of butter, but hey, it’s the holidays, right? 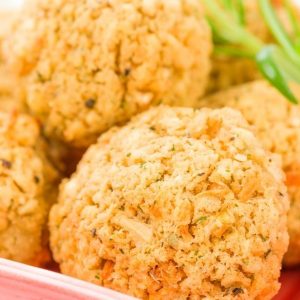 Say goodbye to grandma's old-fashioned stuffing recipe because these balls are the new Thanksgiving and holiday craze! They're buttery, tender, and flavored with just the right amount of herbs. They're crispy on the outside and moist inside, making them the perfect complement to turkey or any main dish you may be serving during the holidays or into the new year.
5 from 1 vote
Print Recipe Pin Recipe
Prep Time 1 hr 30 mins
Cook Time 45 mins
0 mins
Total Time 2 hrs 15 mins
Course Appetizer, Dressing, Dressing balls, Holiday sides, Side Dish, stuffing, stuffing balls, Thanksgiving stuffing
Cuisine American
Calories 210 kcal

Ingredients for the Best Stuffing Balls Ever

Directions for Best Stuffing Balls Ever

Final Thoughts On The Best Stuffing Balls Ever

I hope this stuffing ball recipe has inspired you to start some new habits in cooking this Thanksgiving and holiday season! While it’s fun and memorable to honor old traditions, it can be just as fun to start new ones.

Do you want to manifest your dream life?

Subscribe to get five FREE law of attraction guides. 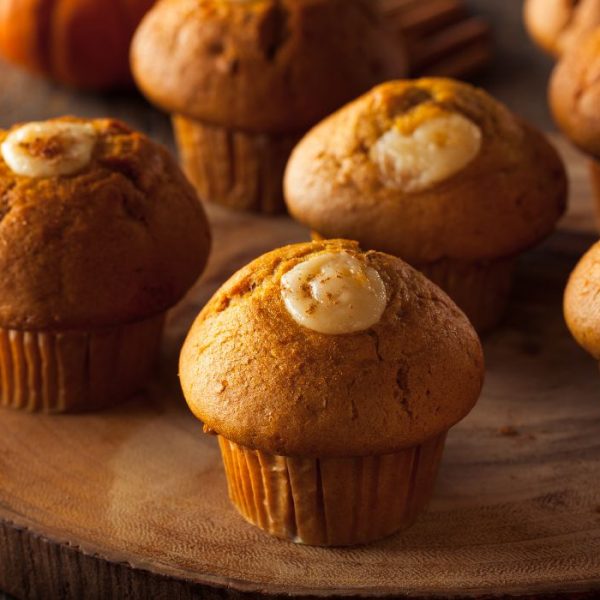 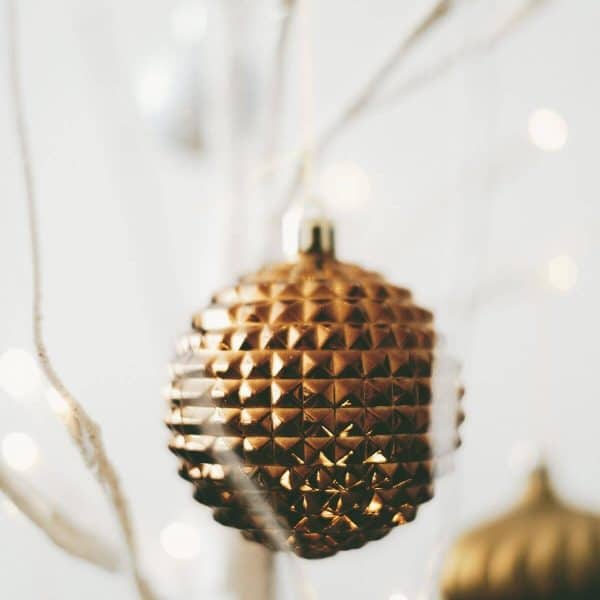 How To Make A Perfect Charcuterie Board They’ll Obsess Over

COPYRIGHT © 2023 CAREER GIRL MEETS... ALL RIGHTS RESERVED
Theme by 17th Avenue
We use cookies to ensure that we give you the best experience on our website. If you continue to use this site we will assume that you are happy with it.OkPrivacy policy